Georgia is  an underrated country that one should visit now while still unexplored, uncommon and untraversed. There’s novelty in seeing it with less crowds because you can truly immersed yourself on the local scene and get to explore hidden gems from the Caucasus Mountains to the birthplace of wine. It is a charming place to wander off into unspoiled pristine mountains with deep breathtaking valleys; indulge on medieval history to the lasting effects of the Soviet era; and enjoy the richness of varied delightful cuisine. You should not miss a country that bridges two continents – Europe and Asia because it gives you an interesting fusion of east meets west. 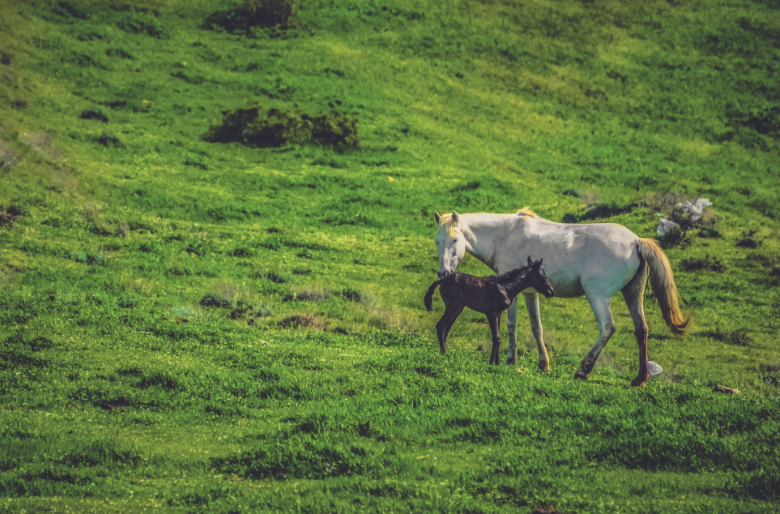 Travel tips: This is a paradise for budget travelers. Food, accommodation and transportations are relatively cheap. (T’bilisi metro cost is 0.5 GEL or 0.20USD!). We booked via airbnb and hired a tour guide (who is fun, funny and funtastic). His details are in the foot note.

Here are the seven places worth visiting.
1) Gori City 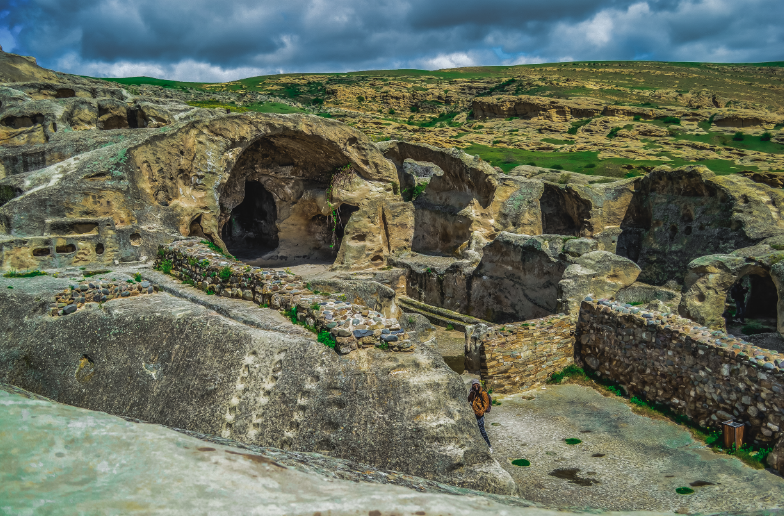 Aside from visiting Joseph Stalin’s birth house at the heart of the city, Uplistsikhe is few minutes away. It is an ancient town with beautiful and mysterious caves that tells stories of its former greatness as the center of Kartli’s Kingdom. Uplistsikhe Caves or Gori’s Rock-cut City with 3,000 years of ancient history is in UNESCO’s list as oldest ancient settlement known in Georgia. The caves are man-made with complete amphitheater, bath house, royal court, slave holes, church, apothecary and many interesting spaces. 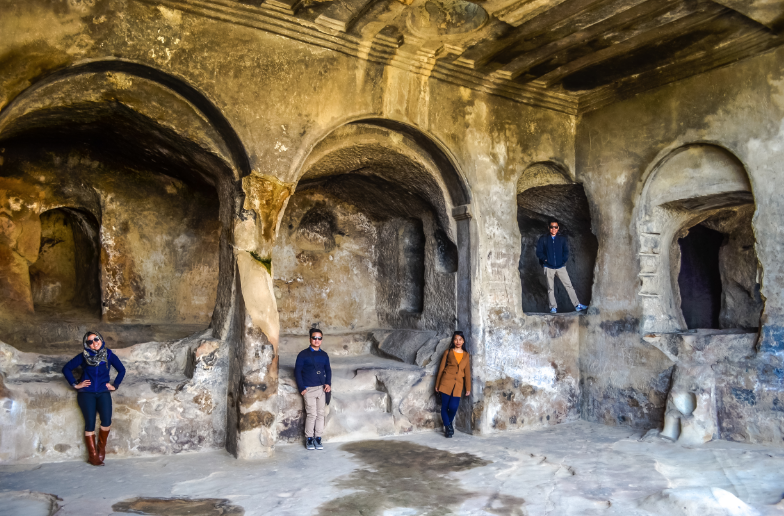 I am drawn to the Hall of Queen Tamara, the first female king during Georgia’s golden age (Europe’s middle ages), because the rock columns and interior roofs are impressively carved with Roman architectural style. Before being used as the queen’s royal court, this was a pagan temple and additional carvings were only made during the “Christian” era.

Something interesting about the Queen, she divorced her husband, a Russian prince and married another prince from northern Caucasus. I am fascinated with women’s role in their history – they have a female king, their symbol is Mother of Georgia and their most revered saint is female evangelist Nino.

This is definitely our favorite. We did not ski but we climbed midway, took the lift and explored the fresh snow at the top of the mountains. We’re from the tropics (Bangkok/Manila) so any snow land is a magic land. It’s just amazing to experience it from time to time even if it’s freezing and our winter boots are soaking with thawed ice.

We stayed in Gudauri Ski Resort in the Caucasus mountains where I just found out that these mountains are technically considered part of the Himalayas. Before Georgia, we were in Ladakh, a city on the Indian Himalayas so it’s exciting to think we just continued our journey from Asia to Europe. This is also one of the reasons why Georgia claims to be part of the old Silk Road bridging the powerful trading nations of Europe, Asia and the Middle East. Don’t miss taking snaps of the beautiful Devil’s Valley of Georgia with panoramic view of Jinvari’s artificial blue lake, a reminder from the Soviet occupation. It is an artificial lake used as hydroelectric power station built by the Soviets 30 years ago. It is possible to go down the lake and have a picnic during summer.

This region is where the best wines are produced so it’s not a surprise the famous City of Love, Signagi, is located atop a steep hill overlooking picturesque landscapes. It was unfortunate that the weather was extremely unpleasant that it was too cloudy, cold and drizzling. Still, it did not dampen our spirits as we walked along the cobblestones and witnessed married couples making their way to the church. Don’t miss entering into Bodbe monastery where the tomb of Saint Nino (their first female evangelist) is buried not just because of its religious significance but the interior is richly decorated with fading frescoes and old Georgian scripts.
The Shuamta convent is remarkable to me because the inside frescoes are semi-covered by white paint. The story was during the Soviet era, they wanted to erase Georgia’s history and culture to make it appear they were an inferior race. I remember this has been the long strategy of powerful nations conquering other races and has been continued on different platforms like proliferation of fake news. 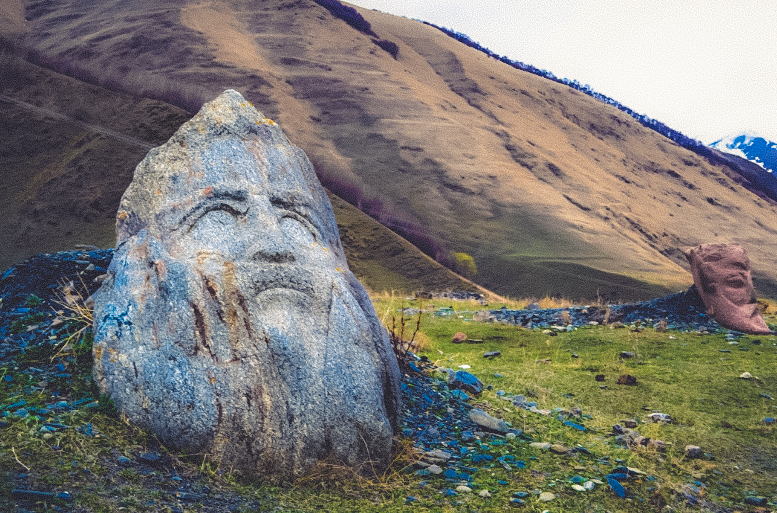 Mtskheta is the old capital of Georgia (5th century) and the “Holy City” for Georgian Orthodox Church. The Svetitskhoveli Cathedral is believed to be where Jesus’ robe was buried and became a burial place for Georgian Kings so this place is one of the most venerated for worship. It has an old city appeal with narrow alleys paved with cobblestones apparent on European cities.

If you want to see the sweeping views of the whole City, go up to Jvari church sitting on the hill overlooking it. This used to be a sacred Pagan temple but converted into an Orthodox church during their conversion to Christianity. This site attracts pilgrims all over the Orthodox church because of the belief on the healing powers of the first cross erected on this hill.
5) Gergeti

The famous Gergeti Trinity Church in Mt. Kazbegi from the 14th century is listed as no. 6 in the world’s most beautiful churches. It was used not just a religious place but as a hiding place during the invasion of other countries and tribes. This is the perfect place to view the Caucasus mountains with its snow-capped mountains and fascinating appeal of adventure. The unspoiled landscapes are worth the hike either by taking a short ride via public van or a steep 3 hour climb to the top.
6) Ananuri

Ananuri is a medieval fortress used to be the ducal seat of the Aragvis with architectural design reminiscent of 16-17th century. The clan members massacred their duke family in 18th century and submitted to the Duke from T’bilisi consolidating the Georgian duchies. It has a Game of Thrones appeal story! Entrance is free and worth the visit.
7) T’bilisi T’bilisi is all about food and architecture. The old historic quarter is where you can find inexpensive restaurants that serve local Georgian dishes and don’t forget to pair it with a Georgian beer! It is located at the foot of the imposing Narikala fortress  where you can walk on a narrow maze of cobblestone streets with old houses. 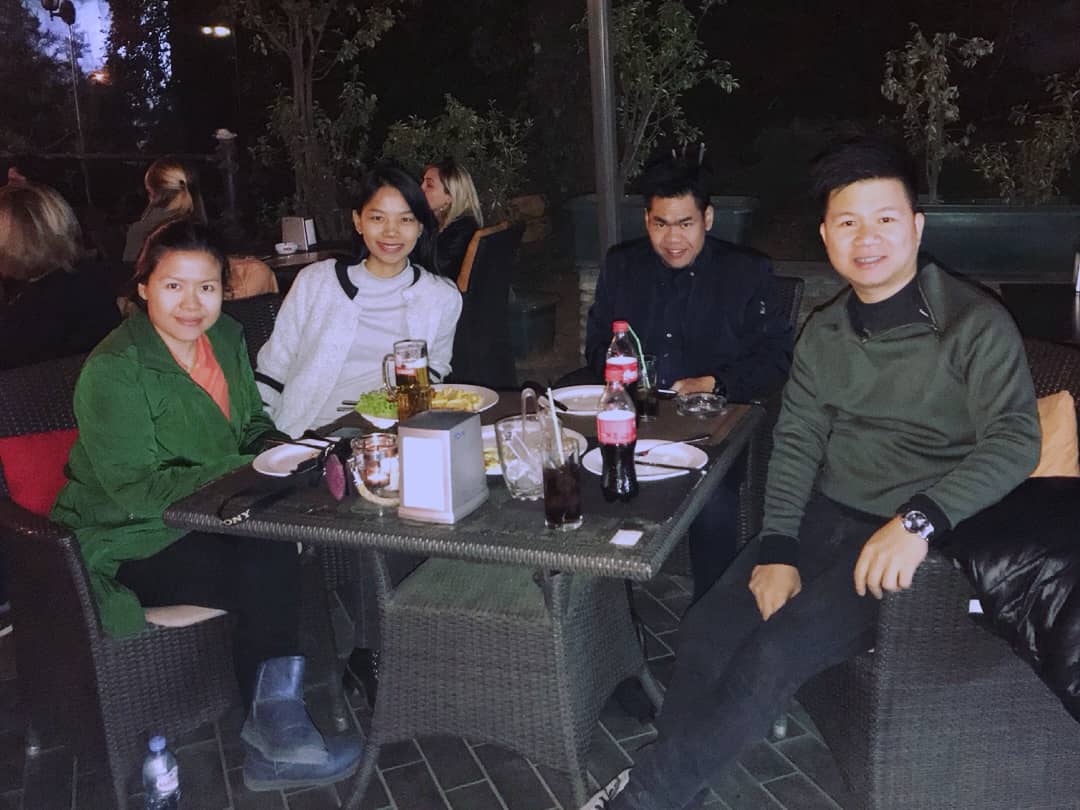 I am particularly drawn to the 19th century architectural structure of their open wood balconies because it is reminiscent of colonial Spanish architecture (usually on old haciendas) similar in the Philippines and Peru. Don’t miss the funicular just for experience and take a cable car to the top of Narikala fortress where you can enjoy the breathtaking view of the whole city. At night, take  a stroll in Freedom Square in Rustavelli Avenue.
———————————————————-

Visa tips: Filipino travelers need an online visa for $20 unless you are a resident of UAE/GCC. Steps are easy and you just need a copy of your passport, photo and $20.

Hire this guy for a great Georgian experience:
George Zardiashvili
Email:dailytoursingeorgia@yahoo.com
Mobile: +995 599 988 815 (whatsapp)
This guy will take care of everything you need but his highlights are his prowess in taking photo snaps and showing you the best places and food (non-touristic). 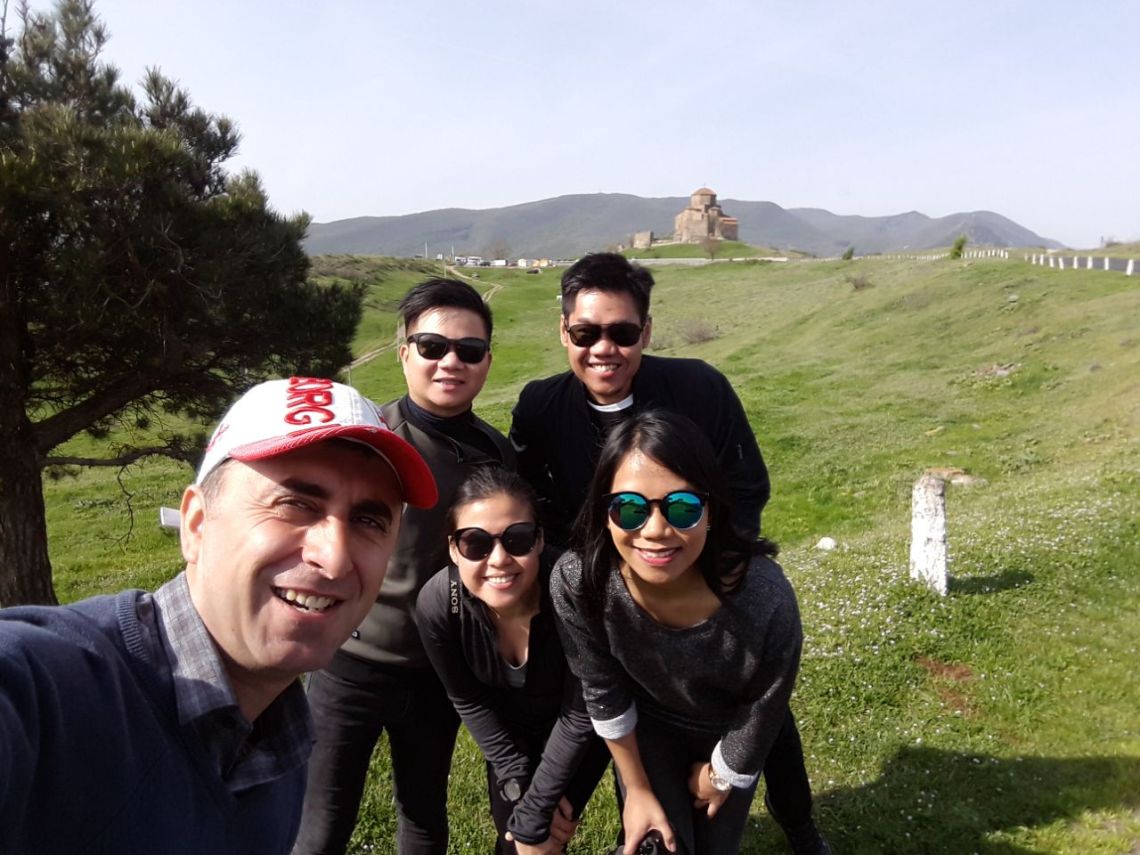 There are too many reasons why you should visit Georgia aside from its natural wonders, tasty cuisine, and a distinct culture at the crossroads of Europe and Asia, Georgians are nice and very accommodating people with close-family values.

The phone photos are from Dan and Georgiee. Thank you.

https://levitalks.wordpress.com A happy heart is a happy life. View all posts by levitalks